Dubai Metro and real estate by the Metro 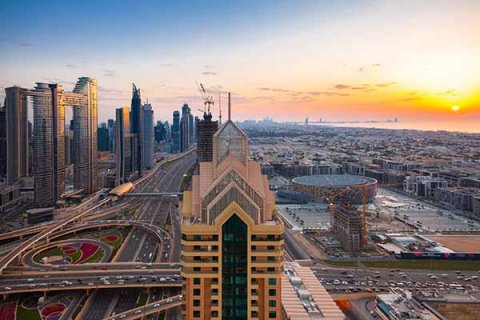 If you think about the metro like rail transport in general, it can be called one of the defining features of modern civilization.

Great Britain would not have become an empire, if not for the trains, which became an icon of the era.

It is difficult to imagine modern Moscow or New York without their extensive metro and subway systems.

China would not have become a world factory without modern rail transport, thanks to which you can cross half of the country within hours.

The importance of the metro for any successful modern city was also understood by Dubai authorities, therefore not long after the intensive development of the city began in the early 00s, they made broad plans to create a modern metro system.

As a result, it strongly influenced the pace of life of the city and the development of its economy. The metro also influenced the real estate market, the distribution of properties, their popularity and prices.

In this article we talk about the Dubai metro as one of the key elements of the urban infrastructure of Dubai.

The full-scale construction of the Dubai Metro can be counted from March 2006. Several international companies were responsible for its construction.

The 45-station project was developed by the Welsh-Hong Kong Aedas. The construction was carried out by the Dubai-based Al Ghurair Investment Group. Britain's Serco managed the metro project, while the government's Roads and Transportation Administration (RTA) has been controlling the construction.

The existing metro lines were built in the early 2010s but plans to continue construction are still being developed today.

Currently, 56 metro stations and three lines have been created with trains daily transporting about 350,000 people and more than 200 million people a year. Each station and platform are equipped with the latest safety technology, fast wi-fi is available everywhere, elevators have been installed, and multi-storey car parking areas have been created.

The maximum fare is about $ 2.

Thanks to its quality, accessibility and location, the Dubai Metro is popular with all the population, even the wealthiest residents feel comfortable and save a lot of time by travelling between the resort and business districts of the city by metro. 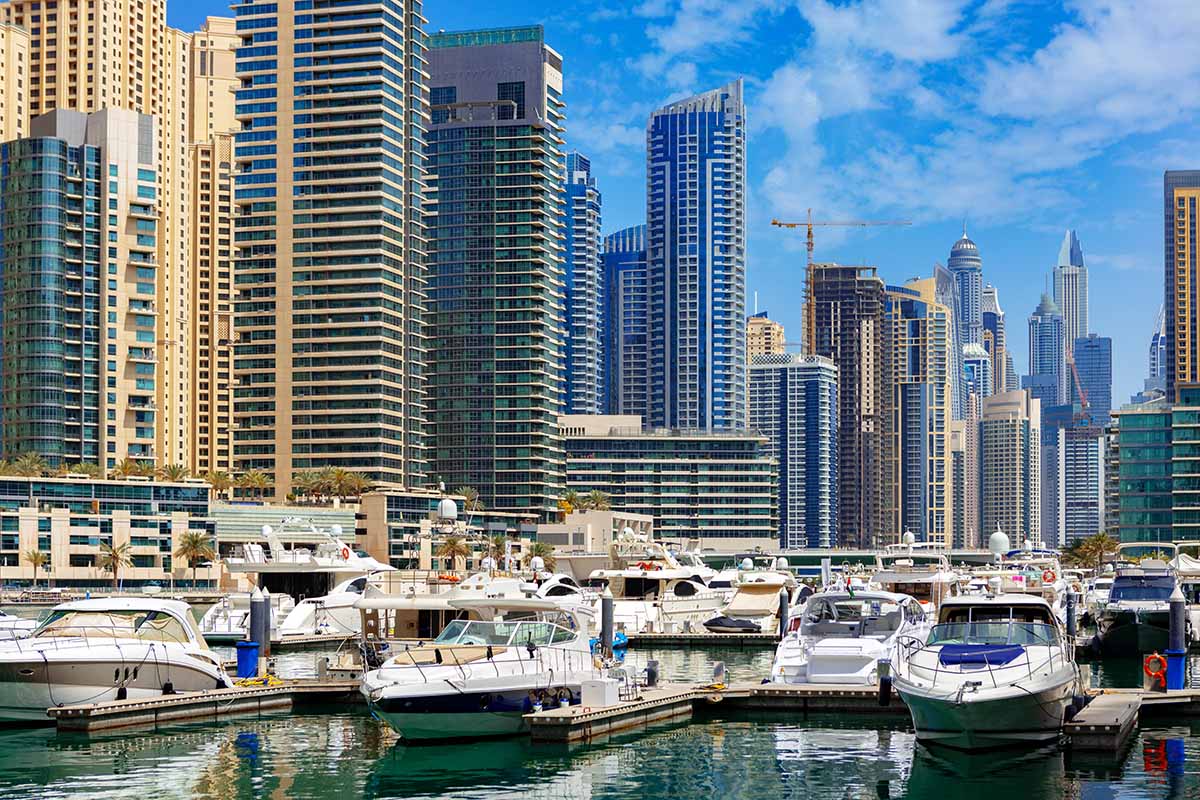 At the moment the construction of three metro lines is completely finished: Red, Green and Route 2020. In addition, there are a few more mini lines or tram routes (for example, in Palm Jumeirah).

Red line is the longest line and has 29 stations. The line runs from the industrial area of Jebel Ali, through Downtown Dubai to the centre of Deira.

This is the second line of the Dubai Metro. It is much shorter than the Red one and concentrated in the central areas of the city: Dubai Creek, Downtown Dubai, Deira. The line features 20 stations.

It is the smallest and youngest route.

At the moment it has officially become part of the Red Line, now the terminal point of this route is the Expo 2020 terminal, northeast of the exhibition centre. Further south there is Al Maktoum International Airport. The end points of Route 2020 are Jabal Ali and Expo 2020. There are 7 stations in total on the line.

Let's list the districts of Dubai, through which the metro lines pass.

There are a total of 14 districts in Dubai, and the Metro goes through:

Jebel Ali includes the commercial and industrial neighborhoods. They are followed by Dubai Internet City, a free trade zone. HMBR and Zabeel are home to the famous Barsha Heights (residential area), Business Bay (commercial area), Downtown Dubai and Burj Khalifa (city centre). Also, the line runs through DIFC (another free trade zone) and further to Deira with many different neighbourhoods.

We'll look at the districts in more detail in the next paragraph. 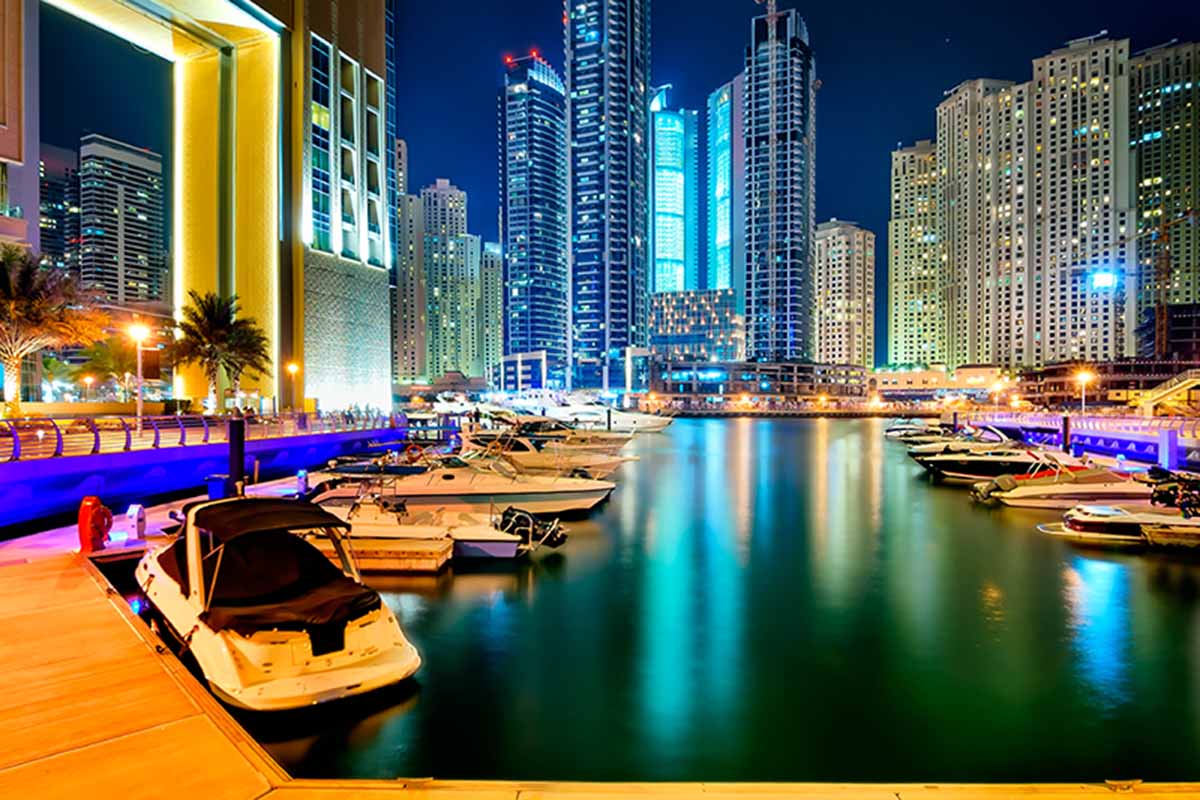 What types of real estate are located near the metro

Due primarily to the economic reasons for the metro, most of the real estate concentrated near the metro stations is a variety of apartments - housing for the working population, business representatives as well as tourists.

However, there are some villas in the nearby residential communities, especially in the southern and south-western areas of the city.

A wide range of villas can be found along Route 2020, in the areas of Al Furjan, The Gardens, Jumeirah Golf Estates, partly in Dubai Investment Park as well as in Jebel Ali Village.

The most expensive area is Jumeirah Golf Estate with an average price of $ 3,146, followed by Al Furjan with $ 2,352 per sq meter.

The most affordable prices in Dubai Investment Park are about $ 1,892 per sq meter.

In the rest of the districts close to the metro stations the most popular options are apartments.

As for the most popular locations, they include:

The last two districts are not directly connected to the Red line, but are in close proximity, connected by a tram road.

The range of properties in the above districts is so wide that you will find options for all tastes and budgets.

The most luxurious options are located in the last three districts. These areas are designed for attracting holidaymakers, wealthy tourists and expats. In these areas, there are many holiday homes and premium apartments and penthouses.

Internet City is a commercial area, the same as Investment Park, therefore it is popular among businesspeople, who value comfortable and affordable housing, not luxury and status.

Barsha Heights and Dubai Creek are family-friendly residential areas. The apartments are designed for middle and upper middle-income residents.

Business Bay and Downtown Dubai are in the heart of the city.

Business Bay is, on the one hand, a large commercial hub, on the other hand, an accessible residential area for foreign professionals, for example from the IT sector, and business representatives. In this area you can find all types of options - cheap, expensive, large apartments and studios, penthouses and even duplex penthouses.

However, housing options in this neighbourhood are pricier than in other parts of the city.

Downtown Dubai and the Burj Khalifa, is one of the most expensive areas in Dubai.

Since apartments in the above areas are more popular among property investors who rent them out, here we offer the average rent rates:

The areas listed above were chosen purpose.

Analytics and forecasts for this event were formed throughout 2021 and these areas are considered as the main ones that will be visited by tourists, business people, investors and other visitors.

The southern districts are popular thanks to their proximity to the Expo, others are sought after thanks to many other attractions and popular venues.