A strong start to the year for Dubai real estate market: data for the first quarter of 2022 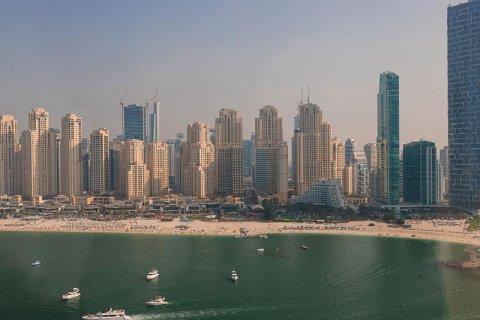 In the first quarter of 2022, an increase in business activity was recorded in all market sectors and at all levels.

The average price of residential real estate in Dubai increased by 11.3% from the beginning of the year to March 2022. On average, apartment prices increased by 10%, and the villa segment showed an increase of 20.1%.

Rental rates, for the same period, showed an increase of 13.1%, which is the largest jump in prices since December 2014 — a record period in the history of observations. The rental price in the apartment segment increased by 11.7%, and in the villa segment — by 22.5%.

If we evaluate the indicators of individual districts, the most impressive results for apartments were recorded in Palm Jumeirah (39.6%) and Downtown Dubai (29.4%), and Jumeirah Islands (31.3%), Emirates Hills (9.3%) and Palm Jumeirah (36.7%) became the leaders for villas.

The number of new objects put on the market has reached 7,812 units. In the remaining three quarters of 2022, it is planned to deliver another 56,871 properties.

According to Ejari (approx. the system of online registration of lease and leasing contracts of Dubai Land Department), the number of registrations of new contracts for the lease of office spaces exceeded the number of extensions of existing contracts. However, the latter category still accounts for 68.9% of the market.

Many new consumers are entering the market, while existing ones are focusing on improving the quality of current facilities.

It is expected that in the next quarters of this year, the situation in this market should improve.

With regard to industrial spaces and the logistics sector, it makes sense to point out that growth is observed in both primary and secondary markets. The key users of this category of real estate are the following: e-commerce companies, Third Party Logistics segment companies, consumer goods and retail, as well as many small and medium-sized enterprises.

The total volume of real estate transactions in the first quarter of 2022 reached 19,009 units. This result puts this period in the place of the most successful first quarter in the history of observations.

The secondary market also took a share of 56.1% in the total number of real estate transactions, respectively, the primary accounted for 43.9%. However, specifically for sales, 68.6% was carried out directly by developers, that is, within the primary market.

Payment plans for off-plan real estate have also changed structurally. Unlike in previous years, at the moment only 5.6% of the cost of the object is paid after completion of its construction. This is 22% lower than in 2021 and 51.1% lower than in 2022.

Interest rates on lending have increased. They are tied to the interest rates set by the US Federal Reserve for the domestic market. The Fed plans to continue raising interest rates throughout 2022, so we should expect an increase in rates in the UAE.